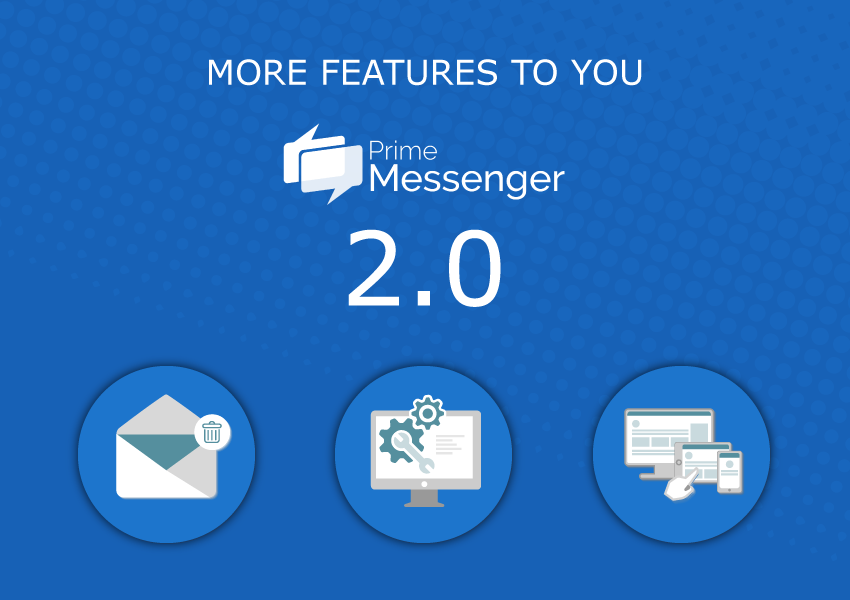 Messaging and chatting features are important growth contributors for many internet and mobile enabled businesses. We strongly believe in this and have hence made PrimeMessenger to work well on Web, iOS and Android.

Our Development Team is constantly working hard to bring to you new features and improvements in PrimeMessenger. We’re also strengthening our back-end to work faster and support our upcoming features.

We’re glad to bring to you the following new developments in PrimeMessenger that are being released now:

Delete Feature
Messaging is a highly private feature. There are many times when users would receive messages in one-to-one or group conversations that are confidential, secret or even offensive, and that they would like to be removed from their messaging history.
The new Delete Feature of PrimeMessenger enables users to delete their copies of messages received and sent. In both one-to-one and group conversations, users can select single or multiple messages and delete them. Users can also clear entire conversations at one go.

Performance Enhancements
At PrimeMessenger, we give a lot of emphasis to performance. A fast performing messaging system can increase user stickiness and give manifold results. Hence, we implemented multiple techniques like local caching, improved pagination and fast served search responses to improve overall performance. We have also increased the scalability of PrimeMessenger with these enhancements.

Responsive Web Interface
The web interface of PrimeMessenger is now completely responsive and fits well across all screen resolutions and devices. This means that your users can now chat comfortably in the mobile web interface too. Thus, if your business / community does not have Mobile Apps, then this provides you a cost effective solution to enable your users to chat while they’re on-the-go.

Android Client Improvements
We have released the below enhancements in specifically the Android interface of PrimeMessenger:

In addition to all the above enhancements, we have also worked on bug-fixes that were encountered so that PrimeMessenger is now more stable for your website and apps.

Got any queries about this release, our upcoming features, or anything else? Please contact us at: info@primemessenger.com .

Get the scoop on What's New

Subscribe to get the latest on Real-time Engagement for Brands!