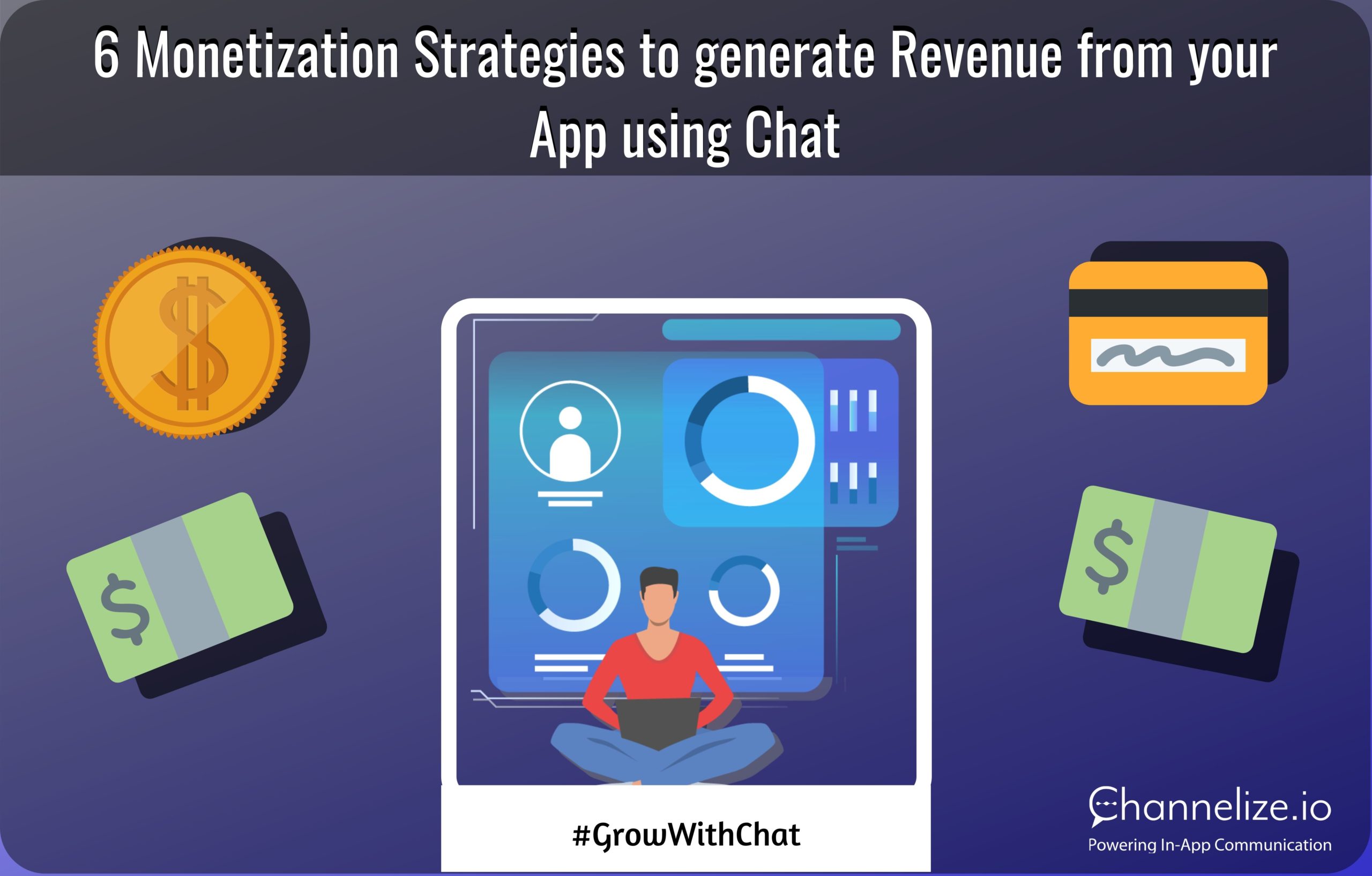 In-App Chat allows Mobile Apps and Websites to improve their User Engagement, and achieve new use-cases. Whether it’s a conversation between – Service Providers and Customers in On-demand Services Apps, Doctors and Patients in Healthcare, Teachers and Parents in Education, Advisors and Investors in Finance Apps, Recruiters and Candidates in Jobs Apps, Attendees in Event Apps, or Prospects in Dating, effective Chat feature in the App can be used to empower all!

Through better assistance in conversations and collaboration, In-App Chat also presents an innate opportunity for Monetization.

In this article, we’re going to list some innovative ways in which a Chat feature that creates 1-1 or Group Connections between users can generate opportunities for Monetization, leading to Revenue Growth for many App-enabled Businesses.

Methods to generate Revenue with Chat

Subscriptions are a popular technique for monetizing Apps. They are a methodology for offering products and benefits to customers with a recurring payment model, thus generating a consistent stream of income.

To achieve monetization with Chat through subscriptions, one of the most important methods is RBAC (Role-Based Access Control). What is RBAC? RBAC provides restrictions on the access of features based on the roles of users. With the help of RBAC, you will be allowed to give access to certain features of Chat, or limit the use of certain features of Chat, to privileged/paid users.

For example: In Dating Applications, where Chat is a straightforward requirement for engagement, users can be provided access to features according to their subscription plan. One such possibility could be that users of Free Plan can exchange Text messages with their prospects, but paid / premium users will be able to access more advanced features like Video Calling with their prospects. Dating application eHarmony, which reportedly has an annual revenue of $75 mn, operates on a similar line with paid membership required for chatting with other prospects.

This method can be used to create further segments within the users based on their interest to pay, thereby opening more monetization options.

Credits and their utilization is another effective way to generate revenue from Chat in your Apps. Users can pay in advance to buy credits and get access to Chat features while paying from their credits as-they-go.

Credits deduction can be associated with the utilization of various chat features, like:

Such a credit utilization method can be a great addition to many App Types. With this pay-as-you-use model, users will not have to worry about their subscription getting renewed every month without using Premium features. They can purchase credits according to their usage.

A good example of such Chat Monetization cases are the Influencer Networks or Online Communities where users connect with Influencer Members.

Many App Businesses use Chat as an important utility feature. Such App types, where Chats are formal and need-based, and not casual, earn from their customer users paying for each Chat Conversation.

Such Apps mostly offer Advisory & Consultation Services to their users, and some examples of these are:

In all such cases, different fees can be charged from users for different types of conversations (Chat & Calling). Lybrate, which is a popular healthcare app, charges patients a lesser fee for a consultation with Doctors over text chat, and a higher fee for consultation over a video call.

Such Apps may also choose for the conversations to remain open for a fixed time-frame, and ask customers to pay again when they need consultation next time. For example, many doctors provide free follow-ups for a couple of days after the consultation.

For such app-based businesses to consistently grow their revenue from Chat, it is important to get good consultation or advisory providers on their platform. Customers would come back to their app only if they have benefited from their past interactions.

Ever heard of Telegram, the famous messenger application? In 2015, Telegram launched Channels, a form of messaging where a user can create an open or closed group and only the group admins can post content in that.

These types of Channels and Groups can also be used for generating revenues. While some groups can be kept free to generate engagement, those premium groups which are led by Experts or Influencers, or which are based on Hot Topics can be made Paid. The payment for such groups can also be of a recurring subscription type because of the regular flow of information.

One industry where this can be very popular is the Financial Industry. Example: An online marketplace / community providing financial advisory might have multiple groups / channels, each led by investment experts or brokers. Users can get connected with Finance Experts over such channels to get expert advice, such as stock market tips. They can subscribe to their channels by paying a certain amount. Groups led by experts having proven strategies can command higher subscription fees. Some apps that are operating on similar lines are: Groww and PickRight.

For further monetization, users can make additional payments to get 1-1 consultancy from the experts via Voice or Video Call.

Most of us would have received Sponsored Messages or InMails on LinkedIn sometime or the other. While normal users can only message their contacts, advertisers or paid users are able to send targeted sponsored messages, or send InMails to users they’re not connected with. Such sponsored messages may include offers, promotions or sales announcements.

This strategy to generate revenue can be used by Apps where there is considerable engagement between users via Chat with their connections.

According to Investopedia, 17% of revenue, or $162 million was generated by LinkedIn in the year 2016 through their Premium subscription model. Most of this was from a combination of services related to User-to-User communication features like sending messages on LinkedIn’s email system (sponsored In-Mails) and contacting members outside of their users’ networks.

Chat as a Value Add-on feature

Many types of apps can benefit greatly from their users communicating with each other. In such cases, Chat complements the core offering of the apps and becomes a value add-on feature that boosts revenue by increasing the repeat purchase rate.

Some examples of this are:

It’s true that there is nothing novel about advertising. After applying all the above techniques, In-App Advertisement is just like a cherry on the cake. In-App Chat feature empowers brands and marketers to innovatively put their Advertisements in the Chat interface for better awareness and revenue. And as per the research conducted on online shopping patterns of customers, users are more likely to spend after going through a personalized advertisement within a Chat interface, rather than a traditional web advertisement.

Getting Chat features in your App

Chat and real-time communication technologies have grown immensely in the past few years. Top messaging apps like WhatsApp, Facebook Messenger, and Telegram get some of the highest engagement levels, and so customers expect the same experience from Chat features they see in other Apps. Effective, feature-rich Chat also presents technology challenges at both application and infrastructure levels. This article talks very well about why it makes more sense to Buy or Rent an In-App Chat Solution, than Build one.

Chat-Platform-as-a-Service (CPaaS) providers like Channelize.io help you hit the ground running with a faster time to market and good ROI. Such platforms provide Messaging APIs, Chat SDKs, Pre-built user-interfaces and Webhooks that enable Apps to launch Chat in hours or days, rather than months, with custom work-flows that are seamlessly integrated into other features of your app.

Hope this article has given a good idea of how Chat in your App can open many new opportunities.

If there are any ideas for generating revenue with Chat that I’ve missed, please feel free to add in Comments.

Get the scoop on What's New

Subscribe to get the latest on Real-time Engagement for Brands!